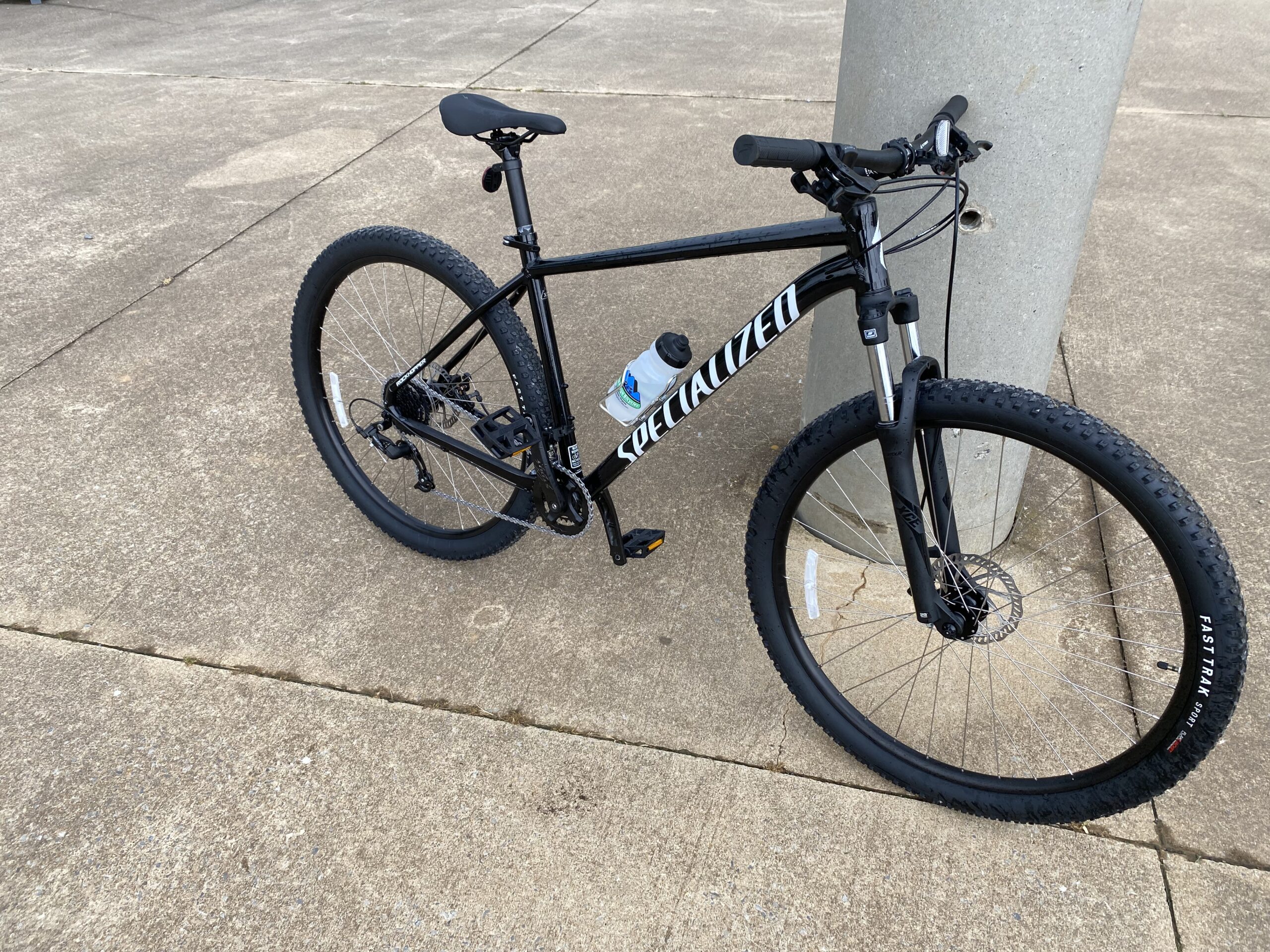 Business is important to me and it takes up an incredible amount of my time – and energy.

However to be able to keep performing at work at higher levels also requires recreation and all that goes with it. We all NEED to get outside, to get sunshine and fresh air, to get exercise, and exert our bodies and our minds with activities that are adventurous and fun.

I Bought a Rockhopper Mountain Bike

Before I started looking into buying a mountain bike I had never heard of Specialized or of its “Rockhopper” mountain bike. I found it doing research online, and then began watching videos and reading reviews.

I think it is a nice place in between the two – and so far I am very happy with mine!

The first ride was just into a local nearby park and around on the paved bike trails there. It had been raining and the actual mountain bike direct trails were muddy – which as I am learning you normally don’t ride when they are wet. Apparently, it damages the trails for starters – and obviously, that is frowned upon – and besides – it would likely result in spending more time on the ground than on the bike anyway!

So just waited patiently a few days until they dried out – then into the woods I went!

I had an absolute blast, and got a crap load of exercise too.

Even though I am now in my mid to later fifties – I felt like I did when I was a kid riding bikes a long long time ago. Even though the bike now has a heck of a lot more features and things.

After a few hours, including at least one of which I spent in a grass field from hell – roasting my brain and body and zig-zagging back and forth all over a three-foot-high grass field I thought I would never get out of! (it was still fun).

When I finally found a path that led back to the paved trails and then out of the park I was exhausted.

I made it home, put the bike away, and then lay down to pass out on my floor in front of the patio – and with lots of AC.

My wife thought I was doing situps. I said ” No. Just passing out.” or words to that effect.

She asked if I had fun. I told her I had a blast and couldn’t wait to do it again!

Here is the bike a few days early when I just rode the paved trails. 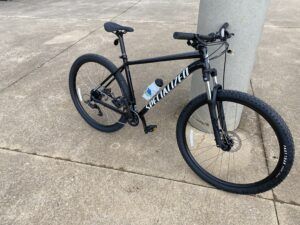 For now, I am happy riding my nearby local trail and getting stronger physically while developing some basic skills for more challenging trails. There is a trail near Front Royal VA which I look forward to riding soon too, and between these two and a couple of others I have more than enough challenges to use to keep getting better for the next few months.

Beyond that, there are plenty of world-class trails within an hour or so where I live, so I am blessed with all kinds of outdoor activities here in the Shenandoah Vally – including mountain biking options.

Want a bike and in the Winchester Area?

He was able to help me select a great bike in my budget range and they had it ready for me from the crate within a couple of hours or so from the purchase time. I also got to ride two brand new bikes at the shop to make sure I was choosing the right bike model and type for me.

My son has an old Schwinn mountain bike (which I used to ride 4 miles each way to and from work years ago) which he will be riding on the trails with me soon, and I have a couple of friends who say they are interested in coming along too.

So we shall see.

If they do and are consistent about it (and our other adventures including kayaking and hiking for starters) I intend to start a Meetup group and formally invite others to join us and come have some fun and fitness too.

The other day I also got to go kayaking again for the first time in a long time.

Here is a pic of my boat in the water just before I set off for a two-hour or so paddle in Lake Frederick near Front Royal VA. 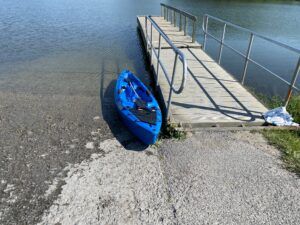 As I set out I saw a little cove to my left and paddled all the way up into it as far as I could go and made a little Youtube video. It was a lot of fun being out on the water again. Want to see the short video? Go to YouTube and look up my L.D. Sewell Youtube channel and you will find it there.

Here is another pic from out on the lake; 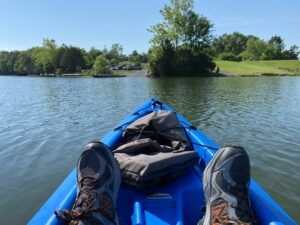 As soon as I set out it seemed to me the boat was riding a bit higher in the bow and a bit lower in the stern than I remembered as being normal. But since she wasn’t taking on water and not sinking I kept on paddling.

I remembered I had added an anchor and some gear to the storage compartment behind me and figured that was the problem.

After I got home and opened the compartment I found it was half full of rainwater in addition to the anchor and gear!

The kayak itself also had several gallons of rainwater in it, which of course all collected in the rear under me and under that compartment – so it is lucky it rode as well as it did, considering all the water on board.

I left the thing sitting out in my yard, uncovered and right side up most of the time through countless rain showers and snow at times. So I won’t make that mistake again hopefully. I drained it all out and now keep it either on its side, upside down, or covered when not in use.

One thing I also forgot was my hat – and that is a necessity on the water if you don’t want to cook your face off.

Fortunately, I was able to skirt the shoreline and void most of the sun at times – so no burn problems this trip despite the lack of a hat. I will try to do better next time and have a hat with me though.

Another activity I am getting back into after being away from it for a couple of years is hiking.

In fact tomorrow I am going back to Lake Frederick and hiking its perimeter which should be a few hours or so.

In future trips, I will be doing some trail cooking and making various meals while hiking, boating, biking, and even in my own backyard. There is just something unique – and fun – about cooking good food outside. So that will be another part of the adventure and one I am looking forward to as well.

You can do the same if you like. Get out there!

All you really need is a comfortable pair of shoes to get started – that will get you walking and hiking – and then you can add gear as you need it and want it and can afford it over time.

If you are in the Winchester, Stephens City, Front Royal VA area – or coming here soon – who knows – maybe you can meetup with us too and we can all have more fun together ; )

Until next time, have fun, stay safe and I will talk with you again soon my friend!